As indicated above, Eliyah-Sliba and Moses are two Seasons that take their origin from one feast, namely, the feast of Transfiguration.  Hence we discuss them together under one title.

EXALTATION OF THE CROSS 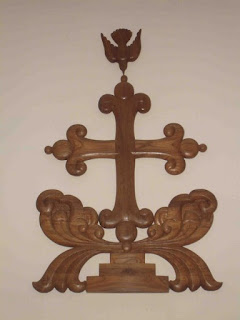 The Church that attains her perfection through the working of the Holy Spirit, reaches the goal with the Second Coming of Iso’-Msiha.  Hence the Second Coming and Final Judgement are specially emphasized during these liturgical Seasons.
There is a belief in the Church, right from the beginning, that Eliyah would appear before the Second Coming of Iso’, and he would make dispute with the son of perdition and make public his errors, and after that the glorious Cross would appear.  This belief too has become a basis for the name Eliyah-Sliba for this liturgical Season.

HOLY CROSS - THE RISEN LORD
The Holy Cross is the Symbol or Icon or Sacrament of the Risen or Transfigured Iso’-Msiha for Mar Toma Nazranees.  As it is already indicated, the Transfiguration on Mount Tabor could be proposed as the substance and reality of Christian living.  Hence the Eastern Churches give it great importance in the divine worship.

ANTICIPATION OF HEAVENLY LIFE
The special feature of these liturgical Seasons is to make possible an anticipation of heavenly life here on earth itself.  What the Apostles experienced on Mount Tabor was the same.  In that ecstatic experience the chief of the Apostles exclaimed: 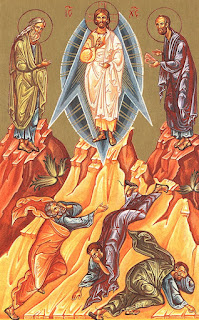 “Lord, it is well that we are here; if you wish, I will make three booths here, one for you and one for Moses and one for Eliyah” (Mt 17, 4).
Today the devotees experience such an anticipated heavenly bliss only in the Church - in the liturgical celebrations of the church, especially, in the Holy Qurbana.  Each and every faithful gets true and authentic experience of the risen Lord there and thus through the grace of the Holy Spirit, he/she is transfigured into his personality.

ESCHATOLOGICAL REALITIES
The prayers and rites, special to these Seasons, are helpful to get convinced of the last realities such as the end of this world, the end of earthly life, the judgement, heaven or hell, etc.  That will definitely make the believers aware of the bitter fruits of sin and will form a repentant heart in them.  Thus it enables them to raise sentiments of authentic praise and thanksgiving to the saving God from the depth of their hearts.

COMMENTARY OF BRIK - ISHO
Brik - Isho, one of the famous commentators of East Syriac Liturgical Year, gives us a good description of the Weeks of Moses:
“After the Weeks of Eliyah, there may be one or two or three Sundays before the  beginning of the Weeks of Dedication of the Church.  Its reason is as follows: No one who lives in this world knows the time of our Redeemer’s arrival.  The Lord himself said: “But of that day and hour no one knows, not even the angels of heaven, nor the Son, but the Father only” (Mt 24, 36).

VICTORY OF THE HOLY CROSS
Another speciality of these Seasons is to proclaim the strength and victory of the Holy Cross.  The “Sign of the Son of’ Man” (Mt 24, 30) that would appear in heaven at the end of the world, as mentioned in the Gospel, would be the Holy Cross itself.  Tradition of the Church also holds testimony to this fact.  It was (and still is) as an anticipated manifestation of the second coming of the Lord that the apparition of the Cross to emperor Constantine, invention of the Holy Cross, etc. were celebrated in the Church.
In early Church, the Feast of the Exaltation of the Cross was held as equal to Easter celebration.  It could be understood only from its veneration as a Sacrament of the Risen Lord; and in fact, the empty Cross signified so in the early Church.

VALUE OF SUFFERING
Flowery or glorious Cross is also a symbol which expresses the real value of Christian Suffering.  Those who suffer with Iso’-Msiha will also be raised with him in order to share his glorious life. 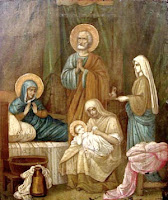 The Feast of the Nativity of Blessed Virgin Mary on September 8th is also an important Feast for Mar Toma Nazranees.  Mar Toma Margam prescribes an Eight-Day Fast in preparation to this feast.  This appears to be a practice that originated in Kerala itself.  It is an observance started in connection with the Moslem invasion of Crangannore in the 9th century, to safeguard the chastity of Nazranee Virgins. During that invasion, they took refuge in the churches where they spent their time in prayer and penance.  Mostly the womenfolk keep this observance.  After the morning Holy Qurbana, they remain in the church in prayer and meditation until the Evening Liturgy of the Hours (Ramsa) is absolved.
We hear of an observance for three days in Persia, known as “Virgins’ Fast”.  It is true that the Eight-Day Fast has some similarity to that.  But historians affirm that the Eight-Day Fast is an independent observance developed among the Mar Toma Nazranees in connection with an historical event.