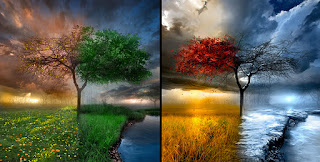 SPECIAL TIME
There is particular time for every act.  It is at special time that we play, take bath, learn, eat, rise up, pray, go to school, return therefrom, and so on.  There is also determined time for sowing, reaping, transplanting, etc.
There is a time also for Holy Qurbana and catechism class.  The important feasts of the parish church are also celebrated in scheduled time.
Summer and rainy seasons are repeated normally at definite intervals in the course of the year.  There are so many important things, which are repeated every year in their own time.

MAR TOMA MARGAM AND THE SEASONS 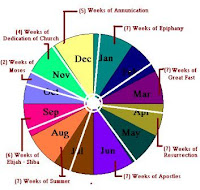 Mar Toma Margam has its own seasons around the year.  They are fixed according to the flow of salvation history.  Concentrating themselves on Jesus of Nazareth, i.e., on the historical life of Jesus, the believers are led to the eschatological fulfilment, namely, the heavenly bliss, in this special arrangement of liturgical seasons.

“Mar Toma Nazranees begin their liturgical year on the Sunday that comes between November 27 and December 3.”

SEASONS AND SALVATION HISTORY
The arrangement of the Seasons in the Liturgical Year is based on SIX central events or celebrations of the Salvation history.  They are:
1.  Jesus’ Nativity-Epiphany
2.  Resurrection
3.  Pentecost
4.  Transfiguration
5.  Glorious Cross
6.  Parousia

FIXING OF SEASONS
All Seasons begin on Sundays.  Usually, there are seven weeks each for every Season; the first and last are permanent exceptions: five or six weeks for the first and four weeks for the last.
Resurrection of Jesus and Finding of the Glorious Cross are the two deciding Celebrations in the Liturgical year.  Resurrection is celebrated on the Sunday that follows the full moon day after March twenty first, the Spring equinox.
Finding of the Glorious Cross is celebrated always on September fourteenth.

“The Syro-Malabar Church begins her Liturgical year at the end of November or in the beginning of December with the SEASON OF ANNUNCIATION.”