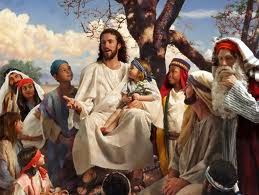 The section of Holy Qurbana, from Trisagion to dismissal rites, is known as the Liturgy of the Word.

PUBLIC LIFE OF ISO’-MSIHA
Liturgy of the Word in the Qurbana celebrates the public ministry of Iso’-Msiha.  With baptism in Jordan Iso’ began his public life.  During his public life, he moved among the people as one among them, selecting and calling the disciples, teaching, guiding and correcting them.  All such realities are celebrated in the Liturgy of the word.

CELEBRATION OF THE WORD
Mar Toma Nazranees emphasize more the celebration and commemoration aspect involved in the Liturgy of the Word than the content of biblical readings.
Liturgy of the Word, for them, is the most sublime moment when the liturgical assembly accepts and confesses the whole of Bible as the source of its faith.

FOUR READINGS
There are four readings in the Qurbana on Sundays and Feast days: two from OT (of which one from the Law and the other from the Prophets), and two from NT (of which one form the Apostle and the other from the Gospels).  Thus the four readings typify the inclusion of the whole Bible.  Relevant psalms or hymns or prayers are also added in between the readings in order to make the celebration more solemn and meaningful.
The OT readings (Qeryane) are read by Qaroya, the Reader and the Epistle or Sliha or Enggarta is read by the M-Samsana or Deacon.

Evangalion is always proclaimed by the principal celebrant, usually, from the Bema.  Homily befitting to the occasion is also a speciality of the Liturgy of the Word.

KAROZUTHA PRAYER
“Karozutha Prayers” which follow the readings and homily is, in fact, a proclamation of the faith of the concrete liturgical assembly.  Its horizontal and vertical reality of existence is beautifully confessed in the ordinary Karozutha.  There is also provision in it to integrate itself to any special situation.
The Eucharistic gifts are normally prepared during the Karozutha prayer.  This liturgical action clarifies how the concrete reality of the worshipping community is incorporated into the Eucharistic gifts.

DISMISSAL RITES
Dismissal rites conclude the Liturgy of the Catechumens.  In the early Church, this part of the Qurbana was considered also as a preparation of catechumens.  Since they could not participate fruitfully in the rest of the Qurbana celebration, they were sent home with a special blessing.  The dismissal rites are optional today, but kept up in the text because of their enriching theological insights.  Anyone who seriously reflect on those formulae of dismissal can understand the emphasis on Eucharistic communion in Mar Toma Margam.  Communion is understood to be the culmination of Qurbana celebration and hence a must.
Posted by Varghese Ousep at 10:26