SPECIAL VESTMENTS
People do dress differently when they go to church and when they go to work.  They put on special clothes during baptism, wedding and burial.  People usually select dresses suited to each occasion.

“Priests and other ministers in the Mar Toma Margam dress themselves in proper liturgical vestments during liturgical celebrations.”

1. Kottina: Kottina is the long tunic type garment reaching from the neck to the ankles, of any colour.
Kottina is the Syriac term used for the outer garment of lso’-Msiha, which was woven as one whole by Blessed Virgin Mary and is said to have grown big with him.  Anyhow, at his crucifixion, the soldiers cast lot for it without allowing it to be torn off (Jn 19,23-24).
The person who wears Kottina, puts on Iso’-Msiha and performs His priestly ministry in His place. 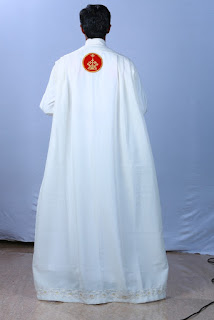 2. Zunara: Zunara is the Syriac word for the belt-like strip of cloth worn over the Kottina at the waist.  It is the symbol of “Chastity”.  Holy Qurbana and other rites of divine worship are acts which are to be performed with perfect holiness, keeping oneself away from all kinds of worldly thoughts and emotions.

3. Urara: Urara is the special humeral vestment worn by priests in the neck in such a way that its both ends extend beyond the knees in front.  The Subdeacons (Heuppadiakana) wear it around their neck in such a way that its ends fall to the back and front on the left shoulder.  The Deacons (Msamsana) wear it on the left shoulder without putting it around the neck.  In Latin tradition, they call it the Stole.
This sacred vestment is the symbol of ministerial priesthood in all liturgical traditions.

4. Zande: Zande is the Syriac word for gloves or handcuffs. They are worn to keep the handcuffs of the Kottina in order.

5. Paina: Paina is the outermost liturgical vestment that priests put on.  It is similar to the cope in Latin tradition.  In Syriac it is known as Gulta.
Paina or Gulta is the garment of justice.  It proclaims the fact that a priest is the fount or source of all kinds of virtues.
Historically, paina appears to be the outer garment of shepherds.  Thus it proclaims the pastoral duty of a priest as well.
The Paina, Zande, Urara and Zunara are made of the same stuff.  Mar Toma Margam prescribes no special colour for liturgical Vestments; the black colour is never used. 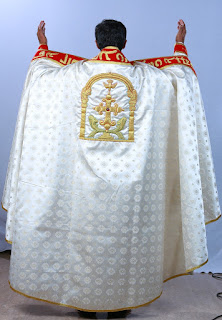 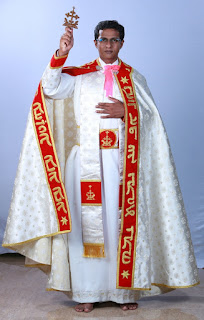