“The public Life of Iso’-Msiha is celebrated during the Weeks of Epiphany.”

The feast of Denha (Epiphany) is the source and inspiration of this particular Season.  The feast is celebrated on the 6th of January, as the Baptism of our Lord in river Jordan.  In this connection, this feast is well known both as Pindipperunal and Rakkulipperunal.
The Syriac term Denha means “epiphany” or “manifestation”.  At the end of his hidden life at Nazareth, Iso’-Msiha, our Redeemer, wished to begin his public life with a ceremonial public announcement.  Not only his forerunner John the Baptist, but even his heavenly Father and the Holy Spirit testified it.

PINDIPPERUNAL
The feast evolved out of the desire of Mar Toma Nazranees to honour becomingly Iso’-Msiha, “the light of the world and life of all” (Order of Raza). 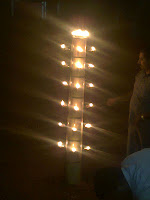 The popular celebrations of it include a plantain trunk (Pindi), specially decorated and erected in front of Nazranee houses with many torches attached to it.  In the previous night of Denha celebration, the family members used to go round it, singing a Syriac hymn, which means “God is light” (El-Paiya).  This mode of celebrity is common mostly in the northern regions of Kerala, especially the Trissur area.

RAKKULIPPERUNAL
The popular celebration in the Southern parts of Kerala stresses another aspect of the same feast, namely, the Baptism in Jordan itself.  In imitation of Iso’s Baptism, the ancient Mar Toma Nazranees used to perform a ritual bath in the nearby ponds or rivers, singing psalms and other religious hymns in the previous night (Ravu) of the feast of Denha.  Thus, the feast began to be known as Rakkulipperunal (feast with a night bath).

“The Season of Denha begins on the Sunday closer to the feast of Denha on January 6th.”

The mysteries of faith such as, the Person of Iso’-Msiha, his human and divine natures, the divine Trinity as expressed through the humanity of Iso’-Msiha, the Trinitarian dimension of our life of faith, the self-emptying love of God, the relation of saints to the manifestation of Iso’-Msiha, and so on shine forth in the prayers and biblical readings, proper to this season.

ONE GOD, THREE PERSONS
As already discussed, God is one; there are three Persons in the one God: Father, Son, and Ruha da-Qudsa (Holy Spirit).
The Second Person of the Holy Trinity, taking human body from Blessed Virgin Mary, became man.  He is Iso’-Msiha
Iso’-Msiha has only one personality, namely, the divine personality, but two natures, the divine and human natures. 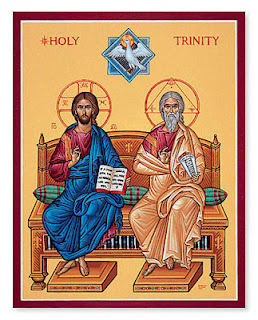 “Whenever a Mar Toma Nazranee makes the sign of the cross on himself, holding the fist three fingers of the right hand joined together and the other two folded inward, he confesses both these basic mysteries of Christian faith, namely, that of the Holy Trinity

“Feasts of St. John the Baptist, Apostles Peter and Paul, Evangelist, Stephen the Martyr, Fathers of the Church, Patron Saint of the local Church, All the Departed, are celebrated according to the given order on the Fridays of Denha Season.  The last Friday of this season, i.e., the Friday immediately before the beginning of Great Fast must be set apart to remember all the Departed.”

Mar Toma Nazranees remember and celebrate all their beloved departed on this particular Friday and not on November 2, as it is in the Latin Church.

THREE - DAY FAST
Three day Fast is another important ce1ebration during Denha Season.  This falls on the Monday, Tuesday and Wednesday, 18 days before the beginning of Great Fast.
This Fast is observed every year as a thanksgiving for the great gift of being saved from a devastating epidemic that affected the places like Bet-Carmei, Athur and Nineveh between A. D. 570 and 581, through prayer and fasting.  Three-day rigorous fasting comes to an end with the veneration of the cross and feast celebration on the fourth day.
The Sivarathri fasting and worship in the temple of the Hindu brethren in Kerala occur almost concurrently.  It is possible that these two fasting are somehow related to each other.

DENHA AND LIFE OF FAITH 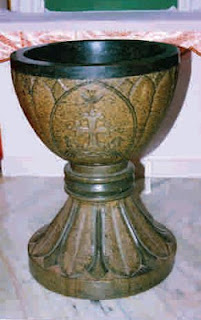 “A believer who celebrates the Baptism and public life of Iso’-Msiha must be convinced more and more of his own baptism which is a sharing in the death and resurrection of the Redeemer and must try to deepen his personal relationship with the Holy Trinity constantly renewing his own life."

A hymn believed to be composed by Mar Aprem and sung in the Liturgy of the Hours of the Sixth Sunday of the Season is worth quoting here:
“Blessed is the One who received Baptism in order to give you the Baptism of remission of sins.
In the Baptism of John, the Holy Spirit descended from above and sanctified the water by his indwelling.  He left everyone else and dwelt upon the ONE PERSON. Now, however, he has descended and dwelt upon all who are born of water.  Among those who were baptized by John, only upon ONE PERSON the Holy Spirit dwelt.  Now, however, he has descended in order to dwell upon many.”
“O Lord, the Baptism you received from John at Jordan is a source of blessings and the fulfilment of life in faith to us.  It prepared the way to heaven, to all those who receive Baptism with perfect faith in the glorious Persons of the adorable Trinity.